The September 2011 BSS workshop was Organic Capitals – Breaking Away from Roman Proportions with Julian Waters. He stressed the importance of planning ahead when one is lettering in order to create pieces that come alive.  Throughout the weekend, this master calligrapher helped us refine our Romans and showed us how to nestle letters so that they fit together in a very natural, organic way.

One amazing item that contributed to the success of the workshop was Julian’s document camera image capture device.  This new era system projected the actual images of Julian’s writing onto a large screen so that each and every participant had a clear, enlarged view. The other perk was a stunning spiral bound, 60-page keepsake booklet for each member, featuring primarily Julian’s work – a resounding source of inspiration and reference. 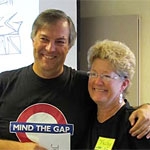 Day one of the workshop was spent using the ruling pen and/or ruling writer.  After introductory basics, we began a series of exercises that focused on variations of texture, line quality and weight.  Movement, rhythm and white space were examined.  For the most part, writing was done on slick surfaced paper (layout bond, Bristol) that allowed the pen to push and pull in all directions and easily skate on the surface with the ink.

On day two, we worked with the broad edged pen, namely a Speedball or Brause nib.  Time was spent on basic strokes and proportions of the Roman alphabet, but we soon moved on.  Julian emphasized that a solid knowledge of the basics is vital – one needs to understand traditional shapes in order to do variations.

After practicing some traditional Romans, we were instructed to “loosen up” and begin to allow letters to interact with and speak to one another. It is also necessary to consider where a letter visually ends in order to accommodate the next letter.  A letter must “fit” with the one preceding and following it, as well as those in the line above and below It takes patience and practice but the end result is well worth the journey.

In addition to Julian’s expert instruction, he shared many helpful tips, a few of which are outlined below: